You are here: Home / About this Blog and Blogging in General / Authored by S / Russia and a smattering of other legitimate news

Yes, Russia and the crisis in Ukraine still dominates most of the news the last few weeks and for good reason.  Here’s the snapshot of that situation and a few other headlines you may have missed.

Russia – Since we last wrote just after Ukraine deposed their president fears surrounding Russia’s influence in Crimea have manifested; under pressure from Putin the Ukrainian province (where Russia has a large concentration of their submarines stationed) voted in a referendum to secede from Ukraine and join Russia.  Russia completed the annexation almost immediately.  The U.S. and its allies have condemned as a land grab in violation of international law and subsequent round of sanctions have followed.  An influx of refugees to Ukraine has begun and Russian troops have since been massing on the Ukrainian border (40,000+ now).  No one knows whether an invasion will occur.  Since the funding expected from joining the EU and subsequently from Russia have both fallen through as well as discounts on gas prices and the rent from Russia for using Crimean naval bases Ukraine faces a dire economic situation.  Although Ukraine is not a member, NATO’s relevance and ability to fulfill their mission  will also be severely tested if Russia invades. 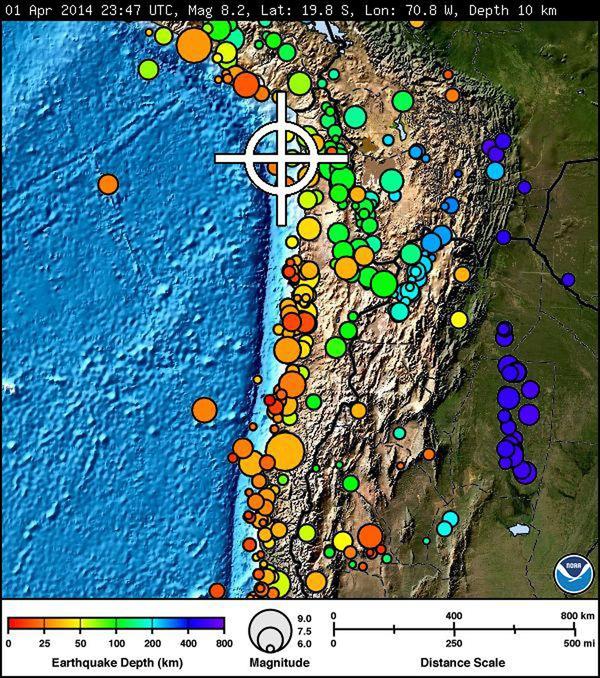 Nature – There were two decent sized earthquakes in Los Angeles, CA (4 and 5) and another (8+) just hit in Chile.  A devastating mudslide in Washington state killed 20 and almost 30 are still missing.

Liberia & Guinea – I think I’d postpone any planned visit; 78 people have reportedly been killed due to an outbreak of the Ebola virus that started in Guinea and has allegedly spread to Liberia.   The World Health Organization has been called in to help contain the disease, which has no cure and quickly kills those who have been infected. [TIME ]

Healthcare – The first enrollment period for “ObamaCare” closed yesterday, 7.1-million people signed up. which cleared the hurdle the Congressional Budget Office had estimated as the number needed for the program to be solvent (not enough would mean too many unhealthy people; not enough premiums).

Accidents – A Malaysian airlines Boeing 777 and its 239 passengers (mostly Chinese) and crew disappeared March 8 during a flight from Kuala Lumpur to Beijing.  Crews have searched relentlessly since then but no sign of wreckage has been found. (LA Times)

Argentina – It’s not a good time to be a criminal there – even petty crimes are being met with extreme vigilante violence as the citizens are just plain fed up with crime; one man was killed for stealing a purse.

Goods & Services – GM recalled over a million vehicles that might have faulty power-steering mechanisms just a few days after a separate recall of 2.2 million cars due to an ignition switch problem that has been blamed for 13 deaths. [CNN]

Central African Republic – An uprising of Christian extremists has up to 15,000 Muslims blockaded, unable to flee sectarian violence that led over 300,000 to flee the country. (Foxnews)

Syria – the Civil war rages on; recent developments are that Turkey shot down a Syrian jet after it allegedly violated Turkish airspace